On April 29 - May 2, American Bach Soloists will present Pious and Profane, a special run of performances featuring six award-winning vocalists from all over the world!

Scroll below to find out why this exciting set of concerts should be on your radar...! 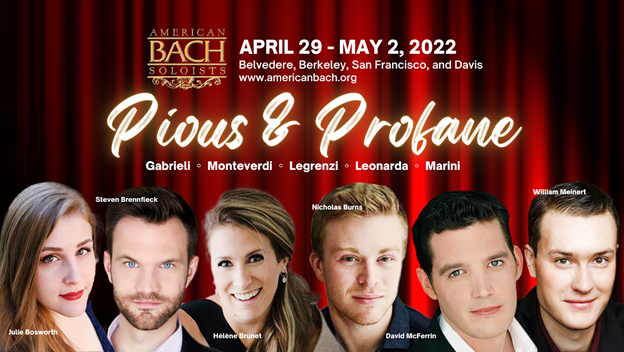 This spring's concert, presented by the American Bach Soloists, is called Pious and Profane because each piece plays into a variety of emotions; from spiritual to secular, and love to war. The program includes Sonata XXI con tre violini by Giovanni Gabrieli, Magnificat a 6 from Vespers of 1610 & Beatus vir by Claudio Monteverdi, Sonata Duodecima by Isabella Leonarda, and more!

The performers that will be singing these works are sopranos Helene Brunet and Julie Bosworth, countertenor Nicholas Burns, tenor Steven Brennfleck, baritone David Mcferrin, and bass William Meinert. These critically acclaimed performers (all under the age of 40!) have received many awards and accolades collectively and we're beyond excited to see them live!

"This is a program that moves from mystery to magic and from the sacred to the secular", says the American Bach Soloists. A lot of the works that will be featured are by Italian composers that were creating music at the time of the shift from Renaissance to Baroque idioms. What we love most about this program is that it features many works and composers that don't always get featured by large symphony orchestras so this is a great opportunity to hear something unique and different!

And the good news is that this program will be featured 4x across the Bay Area during the weekend of April 29th - May 2nd in Belvedere, Berkeley, San Francisco, and Davis! If you're local to San Francisco, you're in for a treat because the concert will be presented in the Green Room, a gem of a venue that perfectly matches the theme of the Italian program that looks upon the City Hall. 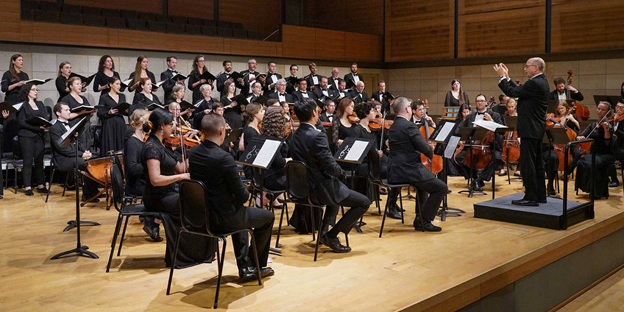 About American Bach Soloists: For three decades, American Bach Soloists co-founder and music director, Jeffrey Thomas has been bringing thoughtful, nuanced perspectives to his performances with ABS. He is recognized worldwide as one of the leading presenters of the music of Bach and the Baroque period.

The American Bach Soloists present an annual Subscription Series with performances in Belvedere, Berkeley, Davis, and San Francisco. Their annual holiday performances of Handel's Messiah, presented each December before capacity audiences since 1992, have become a Bay Area tradition!

The Washington Post acclaimed ABS as "the best American specialists in early music ... a flawless ensemble ... a level of musical finesse one rarely encounters."

Hello Gorgeous! *in Barbara Streisand's voice* If you are gearing up to see the Funny Girl Revival, you MUST know about these 5 fun facts before seeing it! We have facts from the infamous movie and Broadway production to make you a Funny Girl Pro. (And if you haven't purchased ...

On Wednesday, March 23rd, Chamber Music San Francisco will present a one-night-only concert, The Maisky Trio, featuring world-renowned cellist Mischa Maisky who is one of the best modern-day musical storytellers. Plus, scroll below to access $10 off your purchase for tickets to this special performance! Artist Spotlight: Mischa Maisky By ...

Spring is right around the corner and so are some amazing operas!! Check out our list of 5 operas that we highly recommend seeing this spring. From classic tales, to innovative performances, we think you're going to love what's on our list...! 1. Written in Stone presented by Washington National ...